My good friend Lauge bought a Kreidler RM 4 speed from 1974. A 2,9 HP version with a direct shift gearbox. It was very hard to get in third and fourth gear, you had to play with the lever to find the last two gears. The gearshifter had alot of play up and down, the adjuster mechanism had no effect on the lever placement. Something was wrong and we needed to split the cases. 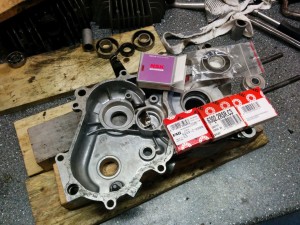 While we were at it we gave it a set of new bearings, seals and gaskets. The old ones where in a pretty poor state. The previous owner had adjusted some of the axles to below zero clearence, so the bearings took alot of axial pressure.

Take a look at all the pictures, there is some information about the faulty gearlever spring in the descriptions.